We’ve been hoarding a few of these bottles for quite some time now, as you’ll see the beer was bottled back in January 2017!

It is a combination of De Molen’s Hel & Verdoemenis (flagship Imperial Stout) and their Hemel & Aarde (Imperial Stout with peaty malt).  A blend of these beers was then added to several different barrels.  And just to make things interesting, the barrels were spiked with a wild Brettanomyces yeast.

When you have two whole floors full of various beers aging in varied barrels, De Molen have a lot to play with.  And it is a game they generally play really well.

The aroma is predominantly peaty, though as the beer warms some sweetness comes through more strongly.  It is also there in the flavour, coming in fast behind the initial sweetness.  Because we know to look for it, I reckon you can detect a little leathery note from the Brett, but I probably wouldn’t notice it if not looking for it.  There is also some barrel character with some woody tannins.

For a rich beer, it finishes quite dry with a little prickly hop bitterness in the lingering aftertaste, which retains the charry, peaty roast malt character.  We’ve waited a good while to see if the Brett. would kick in, but it doesn’t seem to be that strong.  We’ll just enjoy it for what it is. 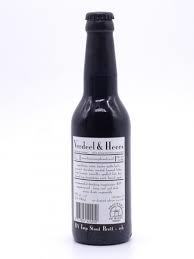