Named after two proponents of the arts from the early 19thCentury – Arthur Rimbaud (a poet) and Eric Satie (a composer) – this beer is a nod to the unconventional, anti-establishment Bohemians of the time.

This beer is at heart a pilsner, but in true De Molen style, it really does not adhere to the style guidelines.  For a start the beer is slightly cloudy straw colour, rather than the clear, golden liquid that so fascinated beer drinkers when pilsners first found favour.

Then there is the Cascade dry-hopping which imparts a lovely fruity aspect to both the aroma and the flavour.  It does compliment the crisp malt body and solid hop bitterness well, but is certainly not to style.

But let’s rejoice in De Molen’s non-confirmism, and enjoy this beer for what it is.  A crisp, refreshing, balanced and flavoursome beer.

Or as De Molen call it – their Craft Bohemian Lager-ish! 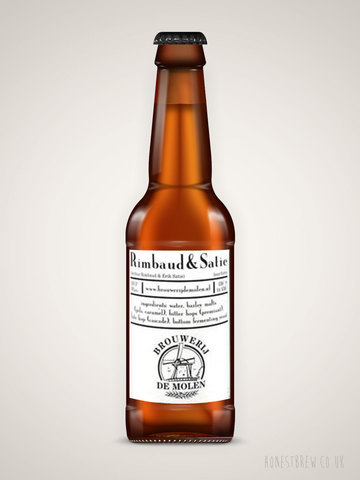