This is a beer that De Molen previously made as a one-off, but it was so well received that it has now become one of the autumn seasonal regulars.

It is an Imperial Hefeweizen, which is a bit of a different style of beer from what we’ve come to expect from De Molen.

A solid malt body with pils malt as well as some wheat malt, and the classic banana aromas from the yeast.  And because it is De Molen, they’ve dry-hopped the beer with classic Saaz hops.

It all comes together in an inviting German wheat beer on the nose, full of that banana and a little extra fruity hint thrown in.  The body is quite dense, with a good malt backbone.  The dry-hopping adds an earthy quality along with a little gentle spice. And somewhere in the background is the slightest hint of something tart.

The beer has a fairly high level of carbonation, exaggerating the spicy prickles from the yeast.  And with a pretty big body, there is a nice warmth in the slightly bitter finish. 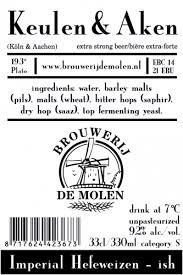