A couple of the things De Molen are renowned for are big dark beers, and the use of smoked malts.   And this beer combines both of those attributes, as well as an interesting third feature.

In the words of the brewer: ‘No smoke without a fire, goes an old saying.  But although we had many smoke in several of our beers, there wasn’t a fire.  That’s why we decided to do something about it.  The result is this perfectly balanced beer with hints of smoke and an small fire on you tongue’.

Smokey beers are often quite divisive; its often a case of love them or hate them.  And chilli beers are very much the same.  So it was an interesting decision to mix these two, but an experiment that really works.

The ‘Smoke and Fire’ has an invitingly sweet chocolate body early, before the slightly peaty smoke checks in.  A subtle chilli kick is in the background, but as the beer progresses, the chilli builds slowly to provide a pleasant warmth in the rich, balanced aftertaste. 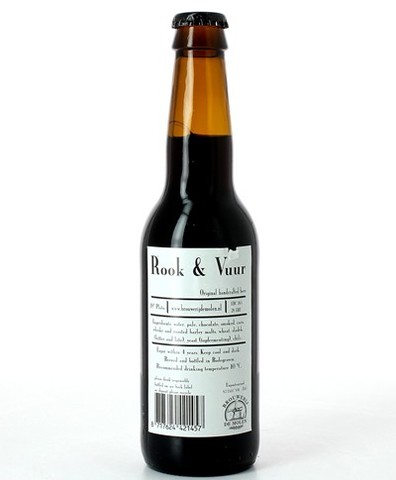