We first met Stefaan back in 2011 to discuss the possibility of importing Troubadour beer into Australia.  The 'interview' consisted of something of a pub crawl through the city of Antwerp, as Stefaan introduced me to each of the wonderful beers they brewed, pouring freely from the taps of Antwerp's best beer bars.

Already a convert to the charms of the Troubadour beers, the evening allowed an insight into who these guys were, and why they did what they did.  They are part of the new wave of Belgian brewing, not constrained to the traditional beer styles we know (and love) from Belgium.

The story began in 2000, with four friends graduating brewing university.  With brewmaster jobs in the established family breweries being scarce, they decided to set up their own brewing company.   After purchasing some brewing equipment, and some trial and error in the garage, they had their first beer ready for commercial production - a semi-strong blonde ale.

The next business decision was to come up with a name.  The four friends - or 'Musketiers' decided on 'Troubadour'.  In their own words...

Centuries ago, young men were travelling around singing and telling stories to entertain people and this way keeping traditions alive. They were called "Troubadours".

Brouwerij The Musketeers wants to keep the production and development of specialty beers alive; something which has a long and proud tradition in Belgium.

Its also the intention that the Troubadour beers explore step by step the world and - as the legendary Troubadours - bring pleasure and entertainment to people. 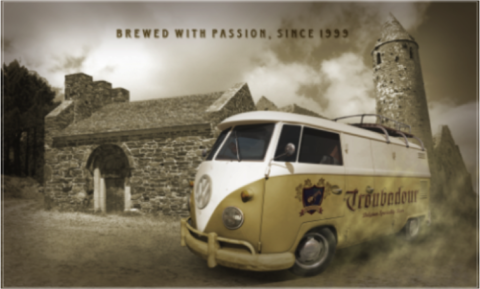