De Molen almost always suggest their beers are leaning to a certain style without actually proclaiming they fit firmly in that box.  And the Licht & Lustig is no different, described by the brewery as ‘American Pale Ale-ish’.

The intention with this beer was to create a beer light in alcohol (for their portfolio at least), with a refreshing crisp and bitter taste.  A beer of which to have a few, or indeed the beer to start a tasty flight.

The beer is a bit of a cross between two distinct styles.  Firstly an English style bitter with a nice malty body and high level of bitterness.  And it also has elements of an American style Pale Ale, with the use of American hops.

Pils and caramel malt make for a decent malt backbone, which supports a good level of hop bitterness from the Sladek bittering hops.  The beer is then dry-hopped with a mix of Columbus and Amarillo hops for a lovely aroma and flavour of fresh tropical fruits.

The name of the beer translates as ‘Light and Lustful’, so drink with care! 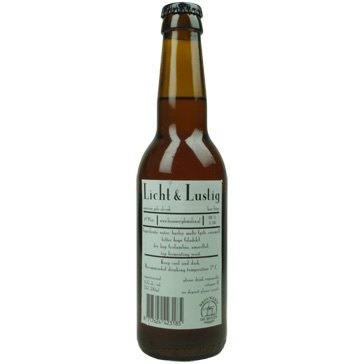