The Boreft Festival is De Molen’s annual beer festival held on the grounds of their brewery in Bodegraven.  They invite around 20 similarly-minded brewers from around to world for two days of tasting some of the world best beers.

For their part, De Molen always make a host of new beers, so each year we time a container so we can bring some of the festival beers over.  And this beer is one that was made for Borefts.

Fresh Hop ’18 is a double IPA featuring hops from De Molen’s own hop farm.  The De Molen staff picked the hops in September 15th, and the beer was made the following day.

Bittered with Apollo and Saaz, and fresh hops of Cascade, Chinook and Willamette.  I was expecting this beer to be a tropical fruit bowl in a glass.

It actually isn’t, and seems to be a beer that you work your way into.  This is more an old style English IPA with a great balance of malt body and hop bitterness. As the beer warms slightly, the full malt sweetness – and a little boozy warmth as well - starts to come through and balance out the assertive bitterness that is so dominant in the first few sips. 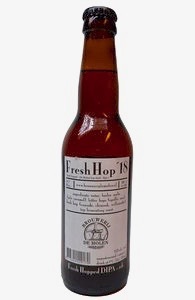