SitiS (Latin word for ‘thirst’) is the collaborative creation from De Molen and Swedish gypsy brewers Omnipollo.  This is the second iteration of the brew, after it was first produced midway through last year.

When you think of a collaboration between these two Euro brewing giants, you’d expect something heavy, dark and probably barrel-aged.  But they defied their instincts and decided to brew something light and fruity.

It is invitingly labelled as an Imperial Pineapple IPA.  It is NOT a NEIPA, although it is very hazy.

The ingredient list boasts the use of oats and wheat in the malt bill, late hop additions of Zeus and Citra, dry-hopping with Columbus and Citra also with corn flakes and of course pineapple.

This all makes for a light and crisp bodied beer, with a really juicy tropical fruit aroma.  The fruit juiciness does flow through into the flavour as much as the nose would suggest.

There is a good level of bitterness, with an even more obvious tartness with strong hints of grapefruit which overpowers any pineapple character to some degree.  The beer finishes quite dry, bitter and tart. 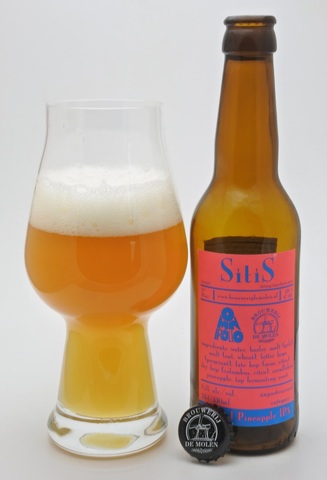