A beer from the second of our new wholesale portfolio partners – La Calavera from the Catalunyan region of north-eastern Spain.  It’s a lovely area to visit, and we now have an extra excuse to go there (when we can travel again that is!)

They’ve been quietly doing their thing since 2011, when two friends turned their homebrewing passions into a business reality.  And over that time their experimental nature has fortunately led them into the realm of sour and barrel aged beers, with a strong tendency toward using Brettanomyces.

And while it is these barrel aged, ‘Bretty’ beers that grabbed my attention, we’ll start with something a little more mainstream – but still a little left of centre.

In making this imperial pastry stout the team have added vanilla, toffee and dry dates.  When pouring it is thick and the dark aroma immediately hits home.  It smells sweeter than it actually tastes.

Vanilla, chocolate and the toffee present early, but there is also a fruity sweetness of dark dried fruits.  It does thin out, and there comes the really interesting and unusual flavour of the dates.  It finishes without being too sweet and all the flavours are nicely in balance. 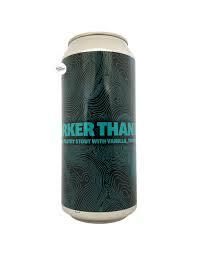