This is another of De Molen’s special, one-off festival beers from their Boreft Festival late last year.  As usual, the brewers have taken license to experiment, and the result is an interesting – if slightly unexpected – beer.

For fans of tea IPA’s (think Yeastie Boys’ Gunnamatta, or even De Molen’s Dag & Dauw), please don’t think this is an IPA with a hint of tea.  This beer is much more about the tea and smoked malts, than it is about highlighting hops.

The beer is sweet at first, with caramel malt and a light bitterness.  The smoked malt and tea combine to accentuate the smokiness, with any hop character really overpowered by the smoke and tea.

This beer may be a little divisive – as smoked beers can be.  For smoky fans though, as well as those partial to an earl grey tea, this beer is a tasty little experiment.

The name translates as 'Scents and Colours'! 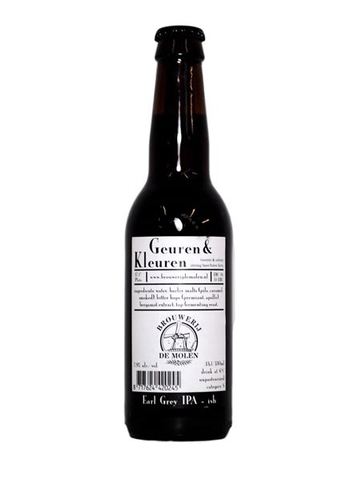