Onyx is the Imperial Stout that forms part of Atrium’s core range of beers.  It is brewed with cacao, vanilla and orange peel.  In its own right, that is an uncommon style for Belgian brewers.  And this beer takes things even further.

We’ve mentioned before that Paula is Brazilian, and takes any opportunity to impart a little Brazilian influence on the Atrium beers.  This beer has been aged in Brazilian Amburana wood barrels.

Amburana is a specific type of oak tree, commonly called Brazilian Oak.  It is mostly used for aging spirits, in particular Cachaca rum.  But with brewers looking for any point of difference, we are now seeing beers aged in Amburana wood barrels.  The US brewers have been doing this more than any other.

The beer is dark and roasty imperial stout.  Lots of dark chocolate notes, vanilla, nutty with a hint of citrus more in the taste than the aroma.  The Amburana wood is known for adding a spicy, nutty, vanilla and cinnamon character, with it all tied together by a pervading woodiness.

This is a really good beer, that marries the many different tastes and aroma together in a beer that is very balanced.  Finishing with a nice spicy dark chocolate bitterness, it is something of a dessert beer without being too sweet.  Let’s call it the perfect grown up dessert beer. 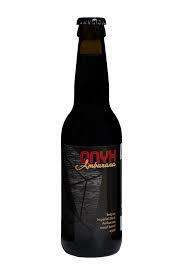 From Brasserie Atrium, this super tasty Red IPA is a beautiful balance of caramel malt and fruity, piney hops