We’ve all been enjoying the hoppy beer offerings from the team at Uiltje, but this beer shows they have more in their locker than just hops.  They also make many bigger, darker, stronger beers.

And what better example at this time of year than their brilliantly-named Christmas beer – ‘F*ck! De Kerstboom Staat in de Fik’!

The beer is an oatmeal imperial stout with the addition of Jamaican coffee beans and orange peel.  And it is delicious (even for a non-coffee drinker).

The Imperial Stout has a lovely body to it, with the addition of the oats creating a real creamy fullness to the mouthfeel.  There is a lot of flavour with heaps of dark chocolate and dark roasted malts giving a real roasty but smooth tasty body with just the slightest bitterness.

The coffee is also there though really not much stronger than you get in a normal imperial stout without coffee added.  And after a couple of tastes you can detect the orange citrus lurking in the background.  As the beer warms it opens up giving the full flavours which linger long in the aftertaste. 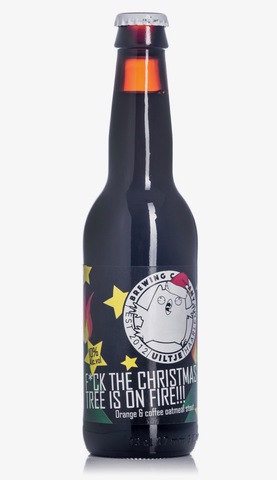