De Molen – a brewery that is a staple of the IBC monthlies, and how lucky we are for this to be so. It is a brewery that requires little introduction, but my first experiences weren’t exactly what my opinion is now. I tried my first De mol in Nov of 2017, it was lighter fare and was good without being memorable. I do remember however getting something very similar in appearance the month after and thought I got the same beer again. Little did I know the label design forever remains the same, the wording changes.  As does everything within, and sometimes on the outside too (hands up who enjoys a waxy de mol?)

The De Molen in this pack is a waxy De Mol  (instant win) - the Party sQuad. It is described as a dry quadruple barrel aged in bourbon, adding sweetness whilst still preserving some bitterness. It was part of the 2018 Boreft beer festival, an event one day I wish to attend, with Jason as my guide. Sounds like a great tour. Who is in?

It pours a darkish brown, with a beautiful beige, bone or off white head. It looks an absolute treat. From a distance I can already smell caramel with a touch of bourbon. On first sip there are some of the qualities expected of a quad. Mild spices, some vanilla, and dark fruits such as plum and fig, the butterscotch and caramel sweetness comes through and takes over, before a small touch of bourbon brushes the palette finishing with a subtle bitterness. This is enough to lick the lips and go back for more. It has a likeness to a barley wine more so than a quadruple for me, but I will not complain. This is a beautiful delicious brew, reaching the highest of heights expected of a waxy de mol. Enjoy!!!!! 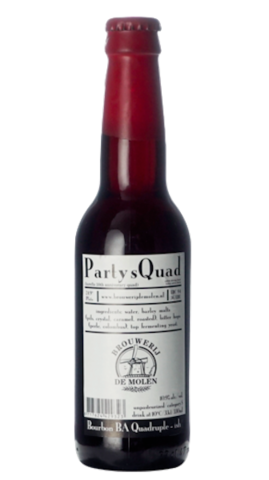