We all know Uiltje are the Dutch hop masters, but they also brew other styles of beer; like this imperial milk stout.

They combine six different barley malts with flaked oats, as well as Magnum and Cascade hops.  And just for good measure, they’ve also thrown in lactose, cinnamon and vanilla.  The result is this thick black beer that gives off lots of chocolate with roasted malts, coffee and vanilla.

These all follow through in the flavour.  The chocolate and lactose dominate, so this really is in dessert beer territory.  Vanilla adds some depth to that sweetness, with the beer sitting heavy on the palate.  The spicing is quite subdued, you kind of know there is some spicy element without being beaten down by one particular spice.

Those hops, together with a little roasted malt bite, do make an effort to dry things out a bit toward the finish, but this really is a beer for the sweet-tooth, pastry stout lovers out there.

As for the cartoon narrative, I have no idea where this comes from or where its going! 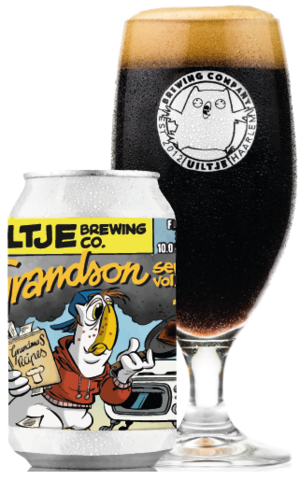