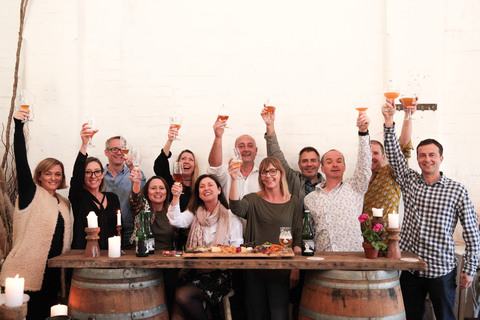 Anita and Jason Pugh have been fortunate enough to travel the globe, indulging their love of travel and at the same time sampling some of the best beers the world has to offer.

Based in London for 10 years, Anita worked in investment banking and retrained as a Nutritionist while Jason set up his own tax accounting practice. The cyclical nature of Jason’s business and Anita’s blatant disregard for routine corporate life, propelled them around the world, enabling them to combine a passion for travel and beer.

Collecting and Sharing our Favourites

"Together, we developed our beer knowledge. Visiting breweries, speaking with brewers and most importantly, tasting a multitude of beer styles in some of the world’s most renowned beer nations. Of particular interest, were the many small brewers that showed us such wonderful hospitality and true commitment to their craft.

Over the years, we collected and shared our favourite beers with those close to us. Since moving home to Newcastle (NSW), we want to share these beers with every beer lover we can reach – and even convert a few non-beer drinkers…"

When thinking of great beer, Belgian beer is surely an obvious choice. No country produces more styles of beer, nor takes more pride in its presentation.  For the Belgian brewer, brewing is an art and an opportunity to express themselves in the character of the beer they brew.   And this is why our portfolio is predominantly Belgian.  We also have beer from three of The Netherlands best breweries; two included in Ratebeer's '100 Best Breweries in the World 2014'.  We'll also shortly be bringing in beer from Italy, Spain and the USA!

We aim to introduce a select portfolio, with a focus on the smaller, artisanal producers – beers that are harder to find.  It will be the first time many of the beers have been imported into Australia.  And of course there are a few well-known classics as well.

Each beer has been hand-picked by us, as having a point of difference, and of course being a fantastic example of artisanal brewing.

"We hope these beers bring as much pleasure to you, as the task of sampling and sourcing them did for us!"

We enjoy hosting beer tastings, whether that be in your bar, cafe or home.  And we love a good beer dinner.  If you are up for a night presenting a flight of beers and sharing the stories of the beer, brewer and brewery, then please get in touch to discuss what you have in mind.