This is a three-way collaboration brewed at Brouwerij Kees early last year, which involved brewers from Velka Morava in Russian, and our good friends from Alvinne.  And it isn’t a sour beer!

The name is a reference to the gigantic gun – Tzar Pouchka – known as the king of guns.  It defends the Kremlin in Moscow but has never been used.

The beer pours a thick black, viscous liquid with an aroma heavy on roasted malts and bourbon from the barrel ageing.  It smells like a really big and rich beer.

And it is.  There is an initial sweetness that doesn’t last long giving way to a dark chocolate bitterness, with really roasted malts and a hint of smoke that is probably from the barrel.   Dark red stone fruits, chocolate, charcoal and a little smoked meat flavour is all thrown into the mix.

It finishes pretty dry for such a big beer, with an aftertaste that lingers long and full. 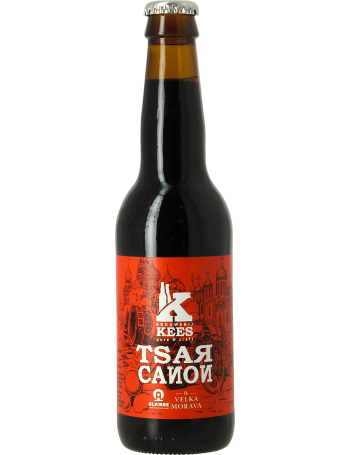