Everyone loves a good tribute beer, and that’s exactly what the Saint & Sinner is – a celebration of 50 years of Maris Otter.

Maris Otter is a type of barley malt, developed in the UK at the Plant Breeding Institute (it is a real thing!).  Introduced in 1966, the Maris Otter malt had its heyday in the 1970’s and early 1980’s.

As you’d expect then, 100% Maris Otter is used, and the malt is dominant in this beer.  In typical De Molen style, they describe the beer as ‘IPA-ish’, but it is really an English-style IPA.  Which of course makes sense, given Maris Otter was an English malt.

It is reasonably highly carbonated, which makes for a lively pour that releases strong notes of melon and light citrus.  There is a fruit and caramel sweetness from the malt, a light hoppy bitterness and dry finish. 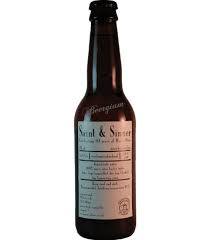