Brewery Kees from the historic town of Middelburg in The Netherlands is without doubt our most creative brewer.  In the six years his brewery has been open he’s produced more than 250 unique beers.  And we aren’t just talking slight tweaks to hop additions – he brews the full range of beer styles; and brews them all really well.

This beer is the Pink Grapefruit IPA and I reckon I remember this beer being part of his original core range.  I can only think of 3 other beers (Caramel Fudge Stout, Barley Wine and 1750 Export Porter) that have survived the cull, so this must be something of a favourite for Kees.

The beer has a pleasant tropical and citrus aroma which follows through in the flavour.  A gentle sweetness first greets the palate as a mix of sweet malt and tropical fruits that are richer and softer than you might expect of the grapefruit.  But it is there, maybe a little subdued but there is a definite growing citrus bite as the beer progresses.

The body is a little heavier than you might expect for the IPA, with a softer carbonation adding to the perceived weight.  The finish lifts things a little with a gentle but sustained tart bitterness. 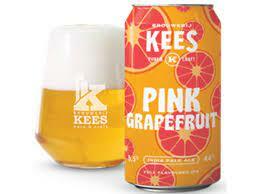