Here’s a relatively new beer from the team at Troubadour, called Jack’s Precious IPA.  It is part of there growing Belgian Legends Series, from which we’ve previously featured Antigoon.

This beers legend is Jack, the old Elephant from the Ghent Zoo.  Legend has it that when the zoo was forced to close in 1904, Jack was sold to a local yeast trader who then had trouble selling on the old pachyderm.  When a planned sale in England failed, story has it that Jack ended up going to a Dutch sausage factory!

Whether that sad ending is fact or urban myth, the boys at Troubadour chose to remember Jack with this tasty little IPA.  The remit was to produce a beer that was under 6%, sessionable but balanced, and in the IPA style.

I think they’ve done just that.  A citrus and grassy hop character, mildly resinous with a decent grainy malt backbone to carry the bitter hops.

Did you know: this beer was originally called Gollem IPA, for the Dutch beer pubs in Amsterdam and Antwerp.  When they first changed the name to Jack’s and featured the elephant image, they fell foul of the local Hindu community as the image featured the god Ganesha.  They quickly changed it, and everybody was happy again! 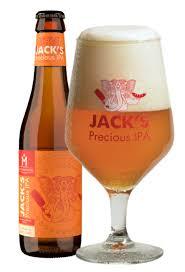