By number of beer styles, Kees is third on our list of brewers featured in our monthly beer packs, behind only De Molen and Emelisse.  Although let’s not forget that Kees was himself responsible for many of those Emelisse beers before moving on to his own brewery.

So another month, another new beer from one of our most creative brewers.   The beer is a tip of the hat to the fruity and bitter IPA’s from America’s west coast.  Although I think this is a lot more balanced – with less hop aromatic – than a true US west coast style.

Thanks to the generous use of American hops – Citra, Mosaic and Simcoe - the aroma is full of tropical fruits like orange, grapefruit and pineapple with hints of pine and grass.

There is a good hit of sweet malt, which balances out the quite high level of bitterness as well as providing a weight to the body of the beer.  On the finish, fruit characters fight back with the aid of good carbonation, to leave a pleasant lingering bitterness.

Not quite a true west coast IPA in my opinion, but a delicious beer nonetheless, which somewhat belies the substantial alcohol level.  Watch out! 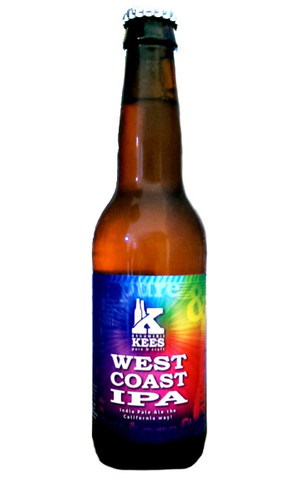