This is another beer from Kaapse Brouwers, who have their brewpub in the port district of Rotterdam. You may recall that the owners of De Molen had a hand in helping start the brewery, and they still brew a number of the Kaapse beers at the De Molen brewery; including this beer ‘Carrie’.

And it has a bit of the De Molen character about it.  Although not as well noted for the hop-driven beers, De Molen make quite a few of them, and we’ve featured several over the years.

They have two distinct styles for their DIPA’s – either really dry, light and crisp, or else much thicker, heavier and sweet.  And this IPA falls into that second category.

Quite a dark body, it has a heavy caramel malt backbone.  There are lots of hops in there featuring Galena, Cascade, Chinook and Simcoe, then dry-hopped with Amarillo.  A really fruity aroma, but somehow a more subdued hop profile, akin to an English IPA. This beer will please those with a sweeter tooth, or who like their IPA’s with a big malt body. 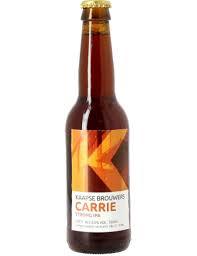