The first of the Redchurch beers – the Bethnal Pale Ale – was well received, so we’ll jump straight in with another.

Continuing the East End naming theme, the Great Eastern India Pale Ale pays homage to the Great Eastern, an historically famous iron sailing ship built in Millwall (on the Thames a couple of miles down the road from Bethnal Green).  Launched in 1858, she was the largest ship ever built at the time.

Built specifically for long journeys, she was intended for travel to Australia without the need for refueling.  Unfortunately damaged on her ill-fated maiden voyage, this ship never made it to Australia.

The beer greets you with a huge tropical fruit aroma.  Centennial, Chinook and Columbus hops combine with all-English caramel malts to provide a crisp but sweet malt backbone which is overtaken by the assertive bitterness.  A lovely light and dry IPA, that seems uncomplicated but delicious. 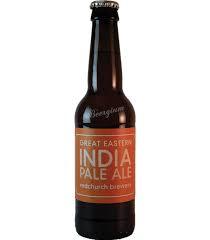