Uiltje have taken their flagship Bird of Prey IPA and pimped it with the addition of some fresh grapefruit.

The original beer is a tropical fruit bowl of taste and aroma with Chinook, Cascade, Citra, Mosaic and Amarillo hops combining for this multi award winning IPA.  And the grapefruit just makes sense to throw in the mix.

There is a nice balance to the beer with the malt body combining with the fruit sweetness to support the hop bitterness and the added tart flavour given by the grapefruit.  Neither really dominate, and that’s what makes this such an easy beer to enjoy.

Is this variation better than the original?  If you can remember the original then let me know.  I generally favour the originals with most beers but on this one I reckon I could be swayed. 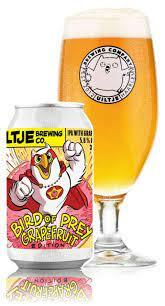