A new container arriving last week means some more fresh hoppy beers from our newest brewer Het Uiltje (The Owl).  And we are starting to really look forward to these pallets arriving.

First one to try in our beer packs is the Psycho Pekko Parrot, and as usual the label art is arresting.  ‘Pekko’ is the Finnish God of fields and crops.  I’m not even sure if this is relevant, or the name ‘Pekko’ just supports the alliteration.  Either way, he’s pretty cool.

The beer is a double dry hopped hazy pale ale.  It does indeed pour a hazy straw colour.  The aroma is of grapefruit, lemon, cut grass and pine. Its all in there, though in a lower level than I was expecting.

In the mouth there is a citrus and grassy character, quite light and a little tart maybe more like grapefruit and lime.  A fairly crisp malt body is accentuated by the citrus tartness to create a light and prickly mouthfeel, and a dry finish.

The bitterness is not as obvious as you’d expect from an APA, and the beer feels a little bit restrained.  Though it makes for a very easy drinking beer, that makes light of the complicated acronyms used to categorise this beer.  (That would be DDH NEIPA-APA!) 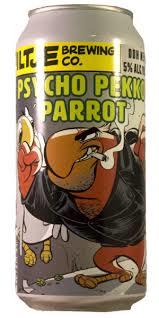