Another collaborative brew from Uiltje, this time with their friends Moor Beer Co; an English brewery based in Bristol that has been operating since 2007.

The beer owes its creation to a birthday celebration.  Beer Temple is a bar in Amsterdam that focusses on American and US-style beers.  They asked their friends at Uiltje to brew a special beer to celebrate their 5th birthday.  And this is what they came up with, back in 2014.  (The bar has recently celebrated their 10th birthday in September this year, and Uiltje made a Big Fat 10 beer!)

Of course the beer is a West Coast US style double IPA.  And in keeping with the 5th birthday theme, it features 5 big American Hops.  Simcoe, Chinook, Citra, Amarillo and Columbus hops were the lupulin weapons of choice.

The beer was so popular it became the house beer of Bier Temple Bar (as well as another couple of bars in The Netherlands), so is a regular in the portfolio. 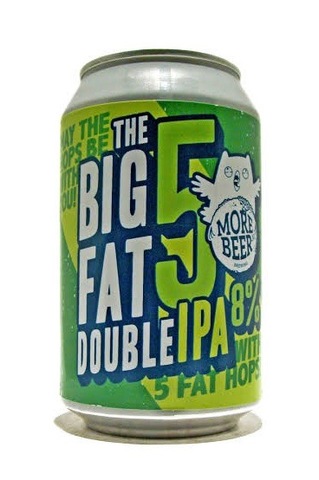