For members who recall the June 2021 pack, we featured the Uiltje Imperial Pineapple Weizen.  Well this beer is the little (older) brother.  The beer has been a part of the Uiltje core range for a while, but we’ve never timed our containers to include this little fella.

Other than the aforementioned beer from June, I don’t think I’ve ever had a hefeweizen with pineapple before.  If anybody has, be sure to let us know what you think of Uiltje’s interpretation!

A hefeweizen is a traditional German beer style that uses a large proportion of wheat (50-70%) in the grain bill and is characterised by a slightly hazy appearance with a heavy yeast influence in the flavour and aroma.

Banana and clove are the main descriptors, and this beer does smell really fruity and we’ll happily call that the pineapple.  In the taste as well there is a distinct fruitiness, which could be a few different yellow fruits but pineapple it is.

The beer has a smooth mouthfeel, and doesn’t have the traditional foamy head, so probably sits a little stiller than a traditional hefe.  And there is this little spiciness in the finish that adds a little interest to the aftertaste. 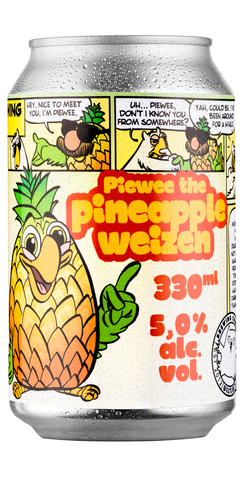