For those that know Brussels ‘other’ brewery Brasserie De La Senne, you may remember that they are renowned for their generous use of hops in all of their beers.  And not the aromatic, US hops but rather than traditional noble hops.

So it is no surprise that their Tripel is known as the most bitter tripel in all of Belgium!  (Look at the bottom right corner of the label – even the brewery notes this beer as a hoppy tripel).

As it tripel, the beer seems to break a few of the stylistic guidelines.  The big yeast characteristics are there in the form of banana, clove and a little peppery spice.  But there is also a citrus note in both the aroma and flavour that isn’t normally expected.

The body is also a little thinner and sharper than the average tripel.  A little bit like a big pilsner body that has the lovely crisp malt backbone.  And this despite the use of Belgian candi sugar, as in most tripel.

It finishes very dry, with that yeast-driven peppery prickle adding to the long, pleasant lingering bitterness. 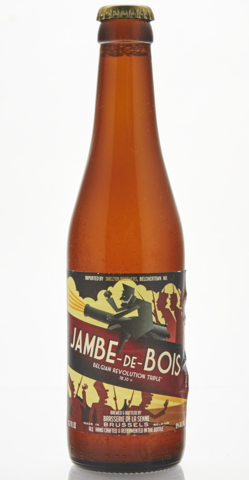