Another beer from the Postel label, one of the 18 certified ‘Abbey Breweries’ of Belgium, which is ultimately owned by brewing giant Heineken.

It is a good example of a big multinational purchasing a successful beer label, and doing very little to change things, rather leaving things alone to keep operating as they were before.

We could just about copy the notes from many of the previous tripels we’ve featured, as this is a classic Belgian Tripel style.

A typical Belgian yeast aroma, even if not as strong as some other beers, giving off banana, bubblegum, apricot, bready malt and gentle spice.

They all come through in the flavour, probably more strongly than the aroma suggests.  Sweet fruit and malt first, joined by the spiciness of the Belgian yeast and a level of bitterness from the hops.

It isn’t going to displace Westmalle Tripel or Tripel Karmeliet as the style leaders, but is a good example of a stock-standard Tripel. 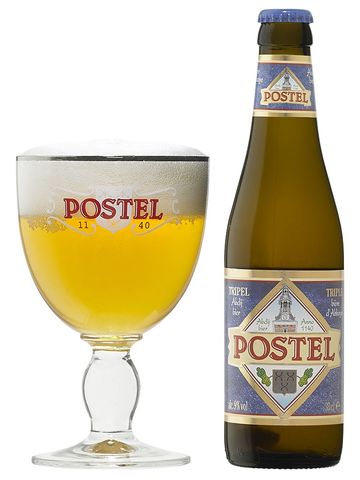