This is a clear yellow golden ale, with very high carbonation which leads to a billowing white head. The nose is subtle, with the only discernable aromas being ripe fruits like apple and grape, and a slight floral scent from a faint hop background.

The flavour is much fuller, and immediately sweet and dense. The Palm yeast combined with the sweet malts suggest caramel and honey. The hop bitterness is slow to cut through the richness of flavour, but does so to finish with a slightly dry bitterness.

The relatively high 8.7% ABV is not evident at all in the flavour, with just the slightest alcohol warmth in the very pleasant aftertaste.

Beer Fact : This is a beer with an interesting history, having been brewed by many different breweries as one was taken over by the other. It was brewed in Brugse by the De Gouden Boom brewery until the brewery was taken over by Palm Corporation in 2004, with production moving out of the city.  While it is no longer brewed within the city walls, it is still known as "The Beer of Bruges". 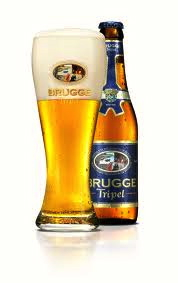