This is my most eagerly awaited beer from our last container.  It was quite big news when Rochefort announced the release of their Tripel in October last year.  It might only be once in a generation that one of Belgium’s Trappist Monasteries release a new beer; the demand for this beer was huge!

15 monks are responsible for brewing the three famous Rochefort beers, the recipes for which have remained unchanged since the 1960’s.  Old monastery records showed that an extra strong blond beer was indeed produced in the 1920’s, but it didn’t prove that popular.

It presents as a lovely yellow-gold liquid, with a fluffy pure white foam.  The aroma is strongly of citrus and spice with that typical Belgian yeast.

With much anticipation the first taste is delicious.  A really smooth mouthfeel is a little surprising, with a definite citrus flavour and an obviously spicy tingle that persists laid over the biscuity malt body.    There is more fruitiness in the aftertaste – mango? – and that pleasant lingering peppery yeast note.

The hype was there, but this really is a good tripel. 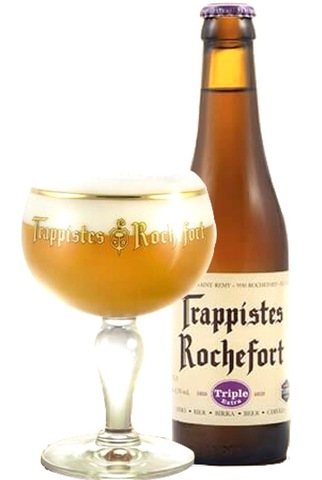 A Guten Free, Organic beer that sits somewhere between a tripel and farmhouse ale

A Belgian Tripel from our French brewery

A Belgian tripel, but one that is a little different