Brasserie des Rocs (formerly Abbaye des Rocs) is considered to be Belgium's first microbrewery, established in 1979.  It is located in the Hainaut province, down near the French border, in the beautiful little village of Montignies sur Roc.

When the brewery started production, the local council limited production to just 50 litres every two weeks.  Thankfully, that production has increased over the years and they now produce seven different beer styles.

La Nounnette - marketed as Abbaye des Rocs Blond in the US - is nominally classed as a Tripel.  I think it sits stylistically somewhere between a Belgian Blond and Tripel.  It pours a cloudy orange amber, with a sweet aroma of citrus, malt and Belgian yeast.

The flavour is of sweetish malts, orange citrus, banana and a little spice.  The beer finishes fairly dry, with a little lingering hop bitterness. 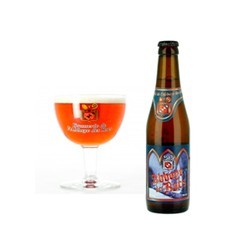