Zinnebir has a slightly cloudy deep yellow to golden body, and a light fluffy white foam.  The aroma is an inviting mix of bread malt, citric notes, herbal and grassy hops.

The flavour is a strong combination of initial malt sweetness giving way to the hop and yeast-driven attributes being a good does of lemon citrus, a little green apple sharpness, and a grassy bitterness.  The beer dries out nicely leaving a pleasant aftertaste and lingering bitterness.

Beer Fact:  this beer was developed by one of the brewers while at a previous brewery.  He brought it to De La Senne, and it has undergone a few changes from a full bodied malty 8% ale to the much lighter but still flavoursome pale ale that it is now.

About the Brewery:  amazingly, Brasserie De La Senne is only the second brewery in Brussels.  (The other of course being the world famous Cantillon Brewery, producing their range of much-sought-after limbic treats). 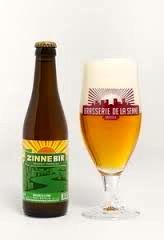