Brasserie St Feuillien is a family owned brewery producing ‘abbey ales’ from the site of the original abbey.  The brewery has been operating since 1873, with their beers being commonly available throughout Belgium and even further afield in neighbouring European countries.

It is the type of brewery that I often forget about, focussing on the newer, lesser-known breweries with the more obvious strangely going under my radar.  But St Feuillien make really good beers, and this Tripel is held out a an example of a very good, classic Belgian Tripel.

That typical Belgian yeast aroma jumps from the glass, with banana, apricot, clove and bready malts.  The taste is initially sweet with a somewhat fruity character mixing with the pretty fullish mouthfeel of the malt body.

The sweetness gives way to some gentle spicing and hop bitterness with an earthy pepper and grassy hop prickle with a high carbonation. There is a long, lingering aftertaste which is both fruity and a little bitter.  A really good Tripel that is deserving of all the recognition this beer has received. 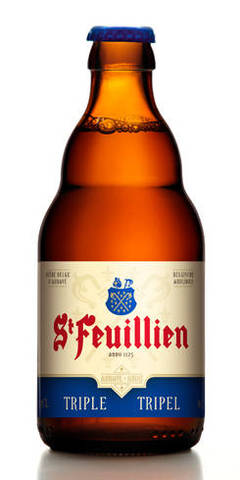