Cluysenaer is a Belgian Tripel from De Proefbrouwerij. It pours an orange golden colour, topped by a foamy white head of lasting duration. It has a lively fruity aroma, backed by citrus and bready yeast.

The aromas carry through to the flavour, with a pleasant malt backbone supporting the sweet sugary fruits and caramel malts. Citrus and a little spice cut through the sweetness to balance out the beer well. This makes for a beautifully refreshing, very easy drinking tripel.

About De Proefbrouwerij: It is the largest consignment brewery in Belgium, and indeed Europe.  The enormous, state-of-the-art brewing facility rents space on the equipment to a range of 'brewing engineers' who craft their beers on site.  They also take on the role of contract brewer for both national and international clients, producing a surprisingly well-known portfolio of beers.  At one point a couple of years back, around 70% of Mikkeler beers were produced at De Proef! 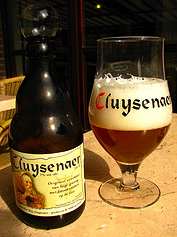