‘Zinnebir’ is Brussels slang meaning ‘little bastards’, and is a term applied to the young men living in the poor quarter of Brussels who have parents who speak different languages (ie. one speaks Flemish while the other speaks French).

But don’t fret – there is no malicious intent in the use of the term, rather recognition by the brewers who are absolute Brussels natives, and who appreciate every aspect of Brussels life and tradition.

So it comes as no surprise that X-Mas Zinnebir is a little different to the normal Belgian Christmas seasonal offering.  Rather than being a high gravity, rich boozy offering, this beer has a lighter mouthfeel and is much drier.

There is a pervading earthiness, even woodiness, to the flavour.  As with all De La Senne beers, they’ve not been shy on the hops.  Dark fruit and chocolate peek through at times, and there is even a little smokiness that seems to come and go.

It is a different take on a traditional Belgian Christmas beer, but one that after the first couple of sips will keep intriguing your palette all the way to the end of the glass. 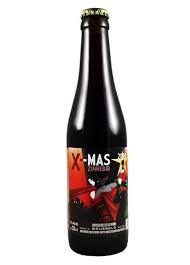 The Christmas ale from this well-regarded abbey label