We love beers that aren’t to any true style.  It somehow makes them more intriguing, allowing open exploration of the beer itself rather than judging against a pre-conceived style guideline.

This beer is something of a misfit. The beer has attributes in common with a dark abbey ale (often called a Prior), or even a quadruple.  Or there is the good old catch-all of Strong Dark Ale.  It is technically classed as a dark tripel - an uncommon style, with the most notable example probably being Gulden Draak.

Whatever box you choose to put it into, it is a quality beer.  It has a heavy malt body with the sweetness of toffee and caramel, raisins and figs.  There is also a moderate amount of earthy hop bitterness and a slight citrus note to break up the sweetness. 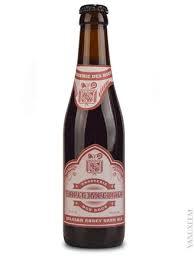 A Guten Free, Organic beer that sits somewhere between a tripel and farmhouse ale