The Reinaert beers are something of a well-kept secret of Belgium, despite being produced in Belgium’s biggest consignment brewery.  The ‘Proef’ (Belgian for ‘the taste’) brewery is responsible for producing an amazing array of beers for many labels.  (At one time something like 70% of Mikkeller beers were made here).

Owner Dirk Naudtsin founded the brewery in 1996.  He already had his own label of Reinaert beers, which he was brewing at another brewery.   While he kept producing the Reinaert beers, his real passion was in brewing engineering.  So he set about establishing the brewery as a state-of-the-art location, providing brewing facilities to some of Europe’s best up-and-coming brewers.

The site has 3 brewhouses, 70 fermenters, 2 bottling lines, 2 kegging lines and a full time yeast laboratory with a staff of 4!

So his tripel – it is delicious, and typically to style.  Hints of orange and tropical fruits, bready, yeasty and a little spicy at the back end.  Everything you want in a tripel style. 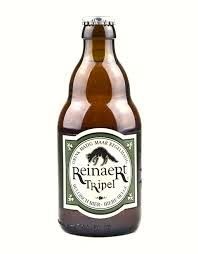