Brown Ales trace their origins back to the late 17th-Century.  And like many historical beer styles they almost disappeared before undergoing somewhat of a revival; albeit that revival was a century ago.

They are mostly assigned to English brewers, and in more recent times the American Brown Ale was born.  Of course, the American version involved adding more hops to the beer.

I’ve probably said it before, but I am a real fan of Brown Ales, particularly the well-executed American style.  It’s a beer that I’d like to see more of, so I’ll always grab some when any of our brewers turn their hand to the style.

Sadly, we could only get a handful of cartons from Kees on the last container.  Fortunately, we have just about enough to include this beer in our members pack.

Kees suggests the beer is ‘richly sweet & nutty’, and there’s not a lot to argue about there.  Quite rich caramel malt with hints of hazelnut.  It finishes relatively dry with a lingering bitterness; though personally I’d love some more hops to this beer.  (But I’m being fussy). 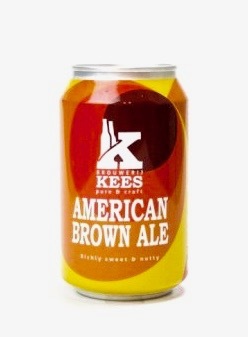