Barrel Project is the rather appropriate name chosen by Kees for his special beers aged in barrels.  He started doing this back in 2015 when he began brewing beers under his own label.

Invariably the beers chosen are the bigger, stronger beer styles – imperial stouts and barley wines being the norm.  But it was nice to pick up this beer which is a Scotch Ale, which may also be called a Wee Heavy, aged for eight months in Bowmore Whiskey barrels.

It has a sweet roasted malt aroma, with a little fruit against the background of the whiskey barrel.  Early sweetness in the flavour is of toasted malt, raisins and a touch of chocolate.  The peat of the whiskey slides in behind to provide a smokiness that slowly becomes more evident.

There is no obvious bitterness, rather the peaty smoke performs the balancing act, without ever getting too peaty. Definitely one for the whiskey fans, but not something to be put off by if you aren’t. 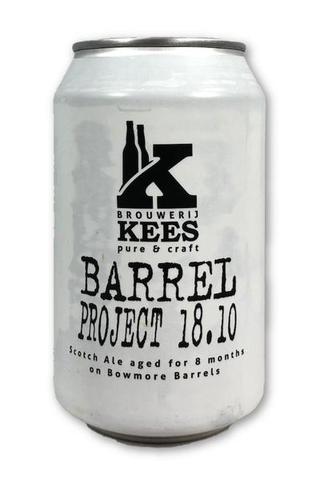