I’m starting to really look forward to these barrel project releases from Kees.

Every month, he is releasing a barrel aged treat.  Typically, Imperial Stout and Barley Wines lend themselves really well to barrel aging, particularly if the barrel previously held whiskey, bourbon or rum.  But every so often, our very creative made from Middelburg comes up with something just a little different.

This is an imperial saison of 9.5%, aged for 6 months in Buffalo Trace bourbon barrels.  When I read that listing on his email, I wanted one then and there.  But we patiently waited a few months, and now we can share them with you.

I guess the first thing I noticed was that is wasn’t very saison-y!  There is a really solid malt body to this beer, that made me think of an English barley wine.  And it is pretty obvious that it has spent time in a bourbon barrel, but that’s not a bad thing.

After a few sips, the saison character seemed to become more prominent.  While the body is heavy, it is smooth (there are oats in the malt bill) and it finishes drier than you’d initially think.  There is some light funkiness, even a little tartness to the aftertaste.  And a bit of vanilla.  It is an interesting and pretty tasty project.  Defintely one of out the box! 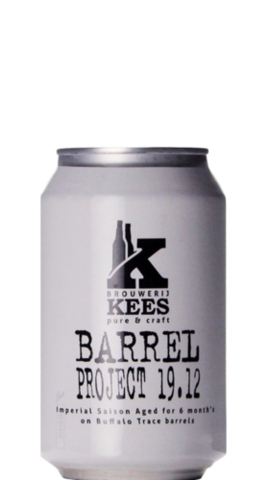