This beer from Kees is one for the sweet-tooths.  A rich and luscious Russian Imperial Stout based on a Dutch pasty dessert.  The Zeeuwse Bolus is of Jewish origin, from the Dutch province of Zeeland.  It is a baked white bread dough rolled in brown sugar and cinnamon.  A bit like a donut but without the holes, it is normally eaten with coffee.

And this is Kees’ interpretation of the beer form of that dessert.

It starts really rich and sweet, and that sweetness lasts until the very end.  If you aren’t a sweets fan, this might verge on cloying, but the depth of flavours and warmth of the alcohol just keep that in check.

Smooth milk and dark chocolate, the brown sugar of course, vanilla, cacao, marshmellow, caramel and a hint of that cinnamon in the background.

There really isn’t any hop bitterness that’s obvious, though it must be there to cut through all that sweetness.  The beer is pretty low carbonation that adds to the decadent full mouthfeel.

It really is a dessert in a can, and you could probably only have one, but sit back, allow this to warm and enjoy the beer for the guilty pleasure that it is. 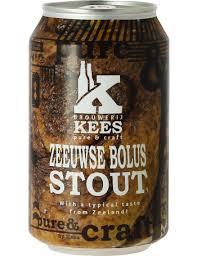 A big Russian Imperial Stout full of all those toasty and roasty malts, dried dark fruits, coffee and spice