Formerly the brewmaster as Emelisse, Kees Bubberman is now brewing under his own label.  First to try is the East India Porter.

It is an uncommon style name for the beer, though one that was very common in the 19th Century.   In fact it was Porter, more than Pale Ale, that was more commonly exported to India during that period.  This despite the great stories around Pale Ale and the evolution of today’s IPA’s.

So in true, historical style this beer is a hoppy porter.

There is strong dark roasted malt aroma, with hints of coffee and chocolate.

The chocolate is less pronounced in the flavour, with the dark malt and coffee notes dominating.  The hop bitterness is light and subtle, and adds a delicate spice character to the lingering roasted bitter finish. 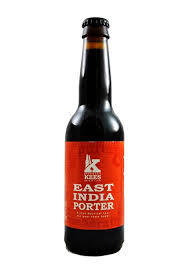 A hoppy porter with Columbus and Chinook hops