Before the brewery, this site was a cheese factory.  This business was sold to the Belgomilk dairy company.  First brewed in 1998, this beer was created in collaboration with Belgomilk, and intended for the French market.  But as often happens, the beer was well received, and found its way into the regular portfolio.

It is a somewhat different beer to the St Bernardus Tripel.   Lighter in appearance, it is also 0.5% lighter in alcohol.

The aroma is full of bready yeast, bubblegum, banana and a little spice.  This carries through in the flavour with a light malty body.  Fruit flavours are more tropical than citrus, like apricot and peach with a hint of mango.

The spicing is quite light for a tripel, and while the beer finishes dry there isn’t really the characteristic yeast prickle in the aftertaste.

It all makes for a super-easy drinking beer, with more subtle characteristics than the standard tripel, though very enjoyable.  That’s why they have two tripels then!

See all of the September 2017 monthly six pack 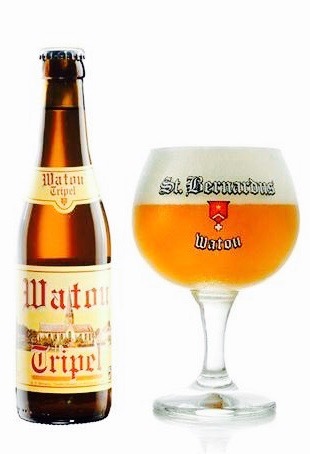