The 'Prior' pours a deep reddish-brown colour, reasonably cloudy, with a loosely packed off-white head that quickly collapses in on itself.  The nose is a rich and complex mix of malt, caramel, dark fruits and earthy yeast.

The flavour is just as rich and rewarding.  A big thick malt body, with caramel, figs, raisins, some gentle spicing and a real earthiness.  Despite the robust flavours the beer has a light mouthfeel, and really dries out as the beer progresses.

As the beer warms, the dark fruit notes present more strongly.  Let this sit out of the fridge for a while before drinking, and you'll get a lot more out of the beer.

About the 'Prior' style:  The beer is essentially a dubbel, but positioned at the top end of that beer style - a 'Premium Dubbel' if you like!The term 'Prior' is a nod to the monastic traditions of Belgian brewing.  In the monastic order, the Prior is considered the primo inter pares, meaning the 'first among equals'.  In practice this is the leader of a small abbey community. 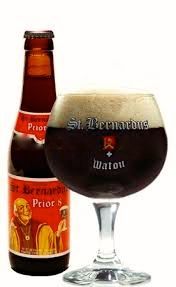