One feature of Belgian Witbiers is the focus on texture and mouthfeel.  This beer is smooth, crisp and well carbonated. But it also has some great flavour – at first a peppery tingle, following through with orange and coriander, clove and banana. As you progress through the beer, the wheat flavour comes through in the finish as the sediment filters down.

This is a well balanced, complex wheat beer which is refreshing and very moreish. The St Bernardus Brewery is renowned for producing consistently superior quality ales, very true to style.

Did you know: this beer was developed in association with Master Brewer Pierre Celis, who is renowned for resurrecting the Belgian Witbier style. He began producing his beer in 1966 in his hometown of Hoegaarden; the beer which became the benchmark for this style. 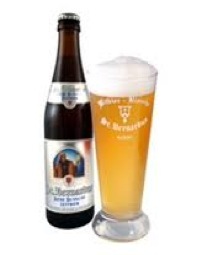 The most recent creation from St Bernardus, it is everything a dark Christmas ale should be.