We often refer to Kees as possibly our most creative brewer, and the creativity extends to more than just the beers.  The names of some of the beers are fantastic, but this beer has a very understated moniker.

From a brewers perspective, this is a simple beer.  One single pale malt and three hops chosen from the usual suspects for an American IPA in Simcoe, Amarillo and Chinook.

So we’d expect this beer to be full of orange and grapefruit citrus, plus peach and melon along with a dank piney note.  Then the Chinook hops are the supporting act, providing a degree of hop bitterness to the proceedings.

And that is pretty much what we’ve got.  The fruity flavours are virtually a roll call we can tick off as the beer progresses.  If anything, it is probably a bit sweeter than you might expect, with a slightly heavier malt body than is typical for a US IPA.

See all of the December 2020 monthly six pack 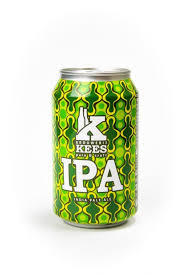