Dochter van de Korenaar choose names for their beers that are reflective of their nature.  So we were more than intrigued to try this beer.

Extase was introduced at the 2013 Zythos Festival.  It was chosen as the ‘Consumer’s Choice’ beer of the festival.  It is a Belgian double IPA, brewed with 14 different hops.  Hops are continually added during the brewing process, and the beer is also dry-hopped.

It has a delicious aroma, but good luck with sniffing out the various hops!

My first taste delivered a surprising sweetness from the solid malt backbone.  As with all Belgian IPA’s, the hop character is more subdued with an earthy character.  It took a couple of sips to get my head away from an American style DIPA, and focus on the more subtle flavour profile of this beer.

The brewer notes that it is a beer with stratification, because of all the hops.  So there is flavour evolution and change, as the beer warms and develops. 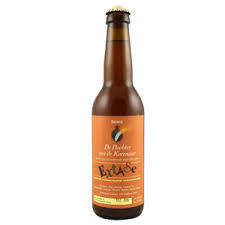