Palm has a tagline for this beer:  ‘the original scotch for more than a century’.  It’s a beer that is fairly easy to find, and a very distinctive style in the beer portfolio of the Belgian bars.

The Gordon’s label was started when British brewmaster John Martin settled in Belgium in 1909.  Since that time three generations of Martin’s have presided over the business.

This beer has been brewed since 1924, and has found a niche in Belgium, as well as a good following in the US.

It is a malt bomb.  Lots of chewy, sweet malt giving caramel, ripe apricot, roasted malt and a little hop bitterness late on.  A sticky mouthfeel and a little alcohol warmth complete the story. 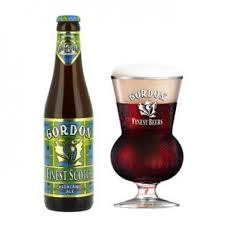