In true De Molen style we have here a beer which is delicious, and a little hard to categorise.  As we’ve noted before, De Molen are not so bold as to proclaim there beer is a particular style, preferring to describe is as ‘ish’.

The name is a mouthful, though tellingly translates as ‘Beautiful & Ruthless’.  It is a fittingly paradoxical name for a beer with two faces.

This beer has the deep malty and fruity body of a quadrupel and at the same time a harder roasted malt bite of an imperial stout.   Big and rich in the aroma, the beer is a good deal drier and spicier than the nose suggests, with hints of dark chocolate and coffee.

We’ll nominally call it a quadrupel (because our website format requires a style), but its an interesting call.  Try asking for another one of these by name!

And there’s more:  We recently received the first Bourbon barrel-aged version of this beer.  We’ve made a few available in the ‘Extra Beers’ section. 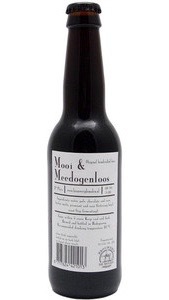