Two friends decided to start a small brewery with second hand equipment back in 2004.  Their venture steadily found favour, such that in 2011 they set up a new facility with increased capacity.

This small brewery in the tiny village of Breuvanne, is nestled in the very southern area of Belgium, down near the borders with France and Luxembourg. It must have been a fantastic addition to the village, whose inhabitants number only in their throusands.

I first came across this brewery many years ago thanks to a very interesting pepper beer.  It turned out that they make a few experimental styles with unconventional ingredients, as well as a range of traditional abbey style ales.

Our first beer from Millevertus is typically Belgian, and well-suited to our current cooler weather (at least for those of us in the south-eastern states I guess!)

La Papesse is a Belgian quadrupel (or ABT as they were known before Belgium started adopting the US terminology).  It pours a rich brown colour, giving off notes of sweet caramel malt, dried red stone fruits a hint of licorice.

These all follow through in the flavour with caramel, dark chocolate, raisins, roasted malt and brown sugar balanced by just enough hop bitterness and a rum-like alcohol warmth that leaves a loverly lingering aftertaste. 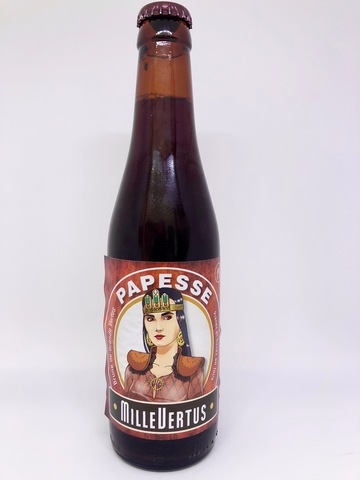